As we celebrate today the birth of one of the pillars of Hernz Ice Cream, we’ll take you down a memory lane from how they began and how they became an empire. A Showcase of a family and how strong and powerful the woman its anchor is.

A lot of people crave desserts, particularly on bad days. Filipinos though, in general, have sweet tooth. Same reason why Pinoys always have something sweet on the table for every special occasion, or even after every meal, they look for something sweet to stay away from the savory taste.

Whether it’s chocolate, cake, or accessible all-weather ice cream for tropical countries like the Philippines, ice cream is what we crave all year round, not just in the summer.

We eat desserts every day, but not every day, an ice cream story is told.

Hernz Ice Cream, a Bulacan-born brand is manufactured by Proudly Filipino Frozen Dairies, Inc. As the legal entity denotes, Hernz is 100% owned by Filipino founders. Before the birth of Hernz, no one has ever imagined, it could make history.

It all started with ice cream reselling. It was an era in which there were no social media. There weren’t many options for entrepreneurs, and there weren’t many ways to market their products. Vendors went door to door selling ice cream; it was the same case for Hernz. Before Its birth, no one has ever imagined, it can make history.

In the 1930s, Amang Ute Hernandez, a resident of Pasay Manila, started selling ice cream, sourced only from his cousin. A decade passed (1940s) with his gathered knowledge for making ice cream, Amang Ute founded a new entity “REPUBLIC”. An ice cream brand that specialized in making popsicles that were resold by other vendors.

And in the 1960s, He formulated an ice cream on a stick which was then called “ice drop”. At this time, all of Amang Ute’s Nine children helped him with his business. In the course of years that followed, the brand as they called it transitioned to “HERN’S”. One of Amang Ute’s daughters Marcelina married a Bulacan-based entrepreneur, Ambrocio “Boy” Cruz, and the legacy continues as they pursued a family ice cream corporation expanding the variety of ice cream products they were known for like Buko Salad and Pinipig Crunch.

In the 2000s, “MILKO”  was founded by Marcelina Hernandez-Cruz alongside her other two siblings, Rufina Hernandez-Agustin and Jose Herndez Jr. putting a halt to Hern’s as a backyard brand.

The company Proudy Filipino Frozen Diaries, Inc. with the brand name “HERNZ” was established in 2005 and was fully developed and is now being led by Marcelina and Boy’s family. Hernz is well-known in the northern part of the Philippines, where they help a lot of small food businesses add some flavor to their existing products, by supplementing desserts in their food choices.

Like many family corporations, Hernz has its own set of hurdles, but Hernz’s management has learned to use this as an advantage over the years. One of the challenges is shifting or transitioning management style and approach. “What started as a backyard business was a challenge to shift to a corporate setting”, Marcelina stated. Like other family businesses, it was a different setup. However, the Hernandez-Cruz’s have been making it work as they envision a lot of great potentials not just for them as a company, but for many small Filipino businesses.

“Our main market is the masses, but surprisingly, we have tapped the mid to upper class, as they tried our products,” says the President. Filipinos are Filipinos as they say. No matter how a Filipino travel, or has lived overseas, they always look forward to the Pinoy flavor. Currently, with 160 employees, Hernz plans to expand its reach not only in North Luzon but also in Metro Manila. It has saturated the Northern market but is looking to continue building power in other parts of the country.

As of this writing, Marcelina Hernandez-Cruz, commonly known to her loved ones as Madam L, still underpin the title of President to Proudly Filipino Frozen Dairies, Inc. From being a simple student of an ice cream vendor to successfully dominating the world of business. The woman who executes an aura of a monarch nevertheless, with a humble nature.

We owe this all to you. 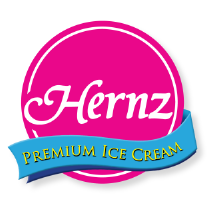